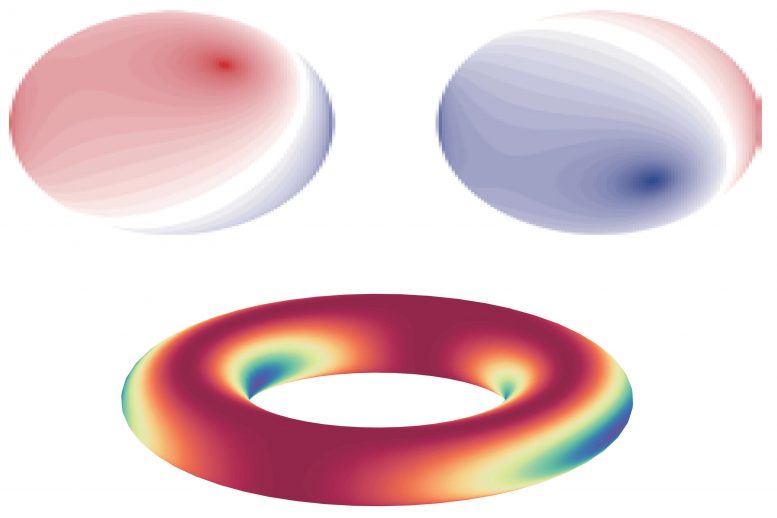 |SOURCE| An exotic physical phenomenon, involving optical waves, synthetic magnetic fields, and time reversal, has been directly observed for the first time, following decades of attempts. The new finding could lead to realizations of what are known as topological phases, and eventually to advances toward fault-tolerant quantum computers, the researchers say.

The finding relates to gauge fields, which describe transformations that particles undergo. Gauge fields fall into two classes, known as Abelian and non-Abelian. The Aharonov-Bohm Effect, named after the theorists who predicted it in 1959, confirmed that gauge fields — beyond being a pure mathematical aid — have physical consequences.

But the observations only worked in Abelian systems, or those in which gauge fields are commutative — that is, they take place the same way both forward and backward in time.  In 1975, Tai-Tsun Wu and Chen-Ning Yang generalized the effect to the non-Abelian regime as a thought experiment. Nevertheless, it remained unclear whether it would even be possible to ever observe the effect in a non-Abelian system. Physicists lacked ways of creating the effect in the lab, and also lacked ways of detecting the effect even if it could be produced. Now, both of those puzzles have been solved, and the observations carried out successfully.

The effect has to do with one of the strange and counterintuitive aspects of modern physics, the fact that virtually all fundamental physical phenomena are time-invariant. That means that the details of the way particles and forces interact can run either forward or backward in time, and a movie of how the events unfold can be run in either direction, so there’s no way to tell which is the real version. But a few exotic phenomena violate this time symmetry.

To produce the effect, the researchers use photon polarization. Then, they produced two different kinds of time-reversal breaking. They used fiber optics to produce two types of gauge fields that affected the geometric phases of the optical waves, first by sending them through a crystal biased by powerful magnetic fields, and second by modulating them with time-varying electrical signals, both of which break the time-reversal symmetry. They were then able to produce interference patterns that revealed the differences in how the light was affected when sent through the fiber-optic system in opposite directions, clockwise or counterclockwise. Without the breaking of time-reversal invariance, the beams should have been identical, but instead, their interference patterns revealed specific sets of differences as predicted, demonstrating the details of the elusive effect.

The original, Abelian version of the Aharonov-Bohm effect “has been observed with a series of experimental efforts, but the non-Abelian effect has not been observed until now,” Yang says. The finding “allows us to do many things,” he says, opening the door to a wide variety of potential experiments, including classical and quantum physical regimes, to explore variations of the effect.

The experimental approach devised by this team “might inspire the realization of exotic topological phases in quantum simulations using photons, polaritons, quantum gases, and superconducting qubits,” Soljačić says. For photonics itself, this could be useful in a variety of optoelectronic applications, he says. In addition, the non-Abelian gauge fields that the group was able to synthesize produced a non-Abelian Berry phase, and “combined with interactions, it may potentially one day serve as a platform for fault-tolerant topological quantum computation,” he says.

At this point, the experiment is primarily of interest for fundamental physics research, with the aim of gaining a better understanding of some basic underpinnings of modern physical theory. The many possible practical applications “will require additional breakthroughs going forward,” Soljačić says.

For one thing, for quantum computation, the experiment would need to be scaled up from one single device to likely a whole lattice of them. And instead of the beams of laser light used in their experiment, it would require working with a source of single individual photons. But even in its present form, the system could be used to explore questions in topological physics, which is a very active area of current research, Soljačić says.

“The non-Abelian Berry phase is a theoretical gem that is the doorway to understanding many intriguing ideas in contemporary physics,” says Ashvin Vishwanath, a professor of physics at Harvard University, who was not associated with this work. “I am glad to see it getting the experimental attention it deserves in the current work, which reports a well-controlled and characterized realization. I expect this work to stimulate progress both directly as a building block for more complex architectures, and also indirectly in inspiring other realizations.”