Old human cells return to a more youthful and vigorous state after being induced to briefly express a panel of proteins involved in embryonic development, according to a new study. 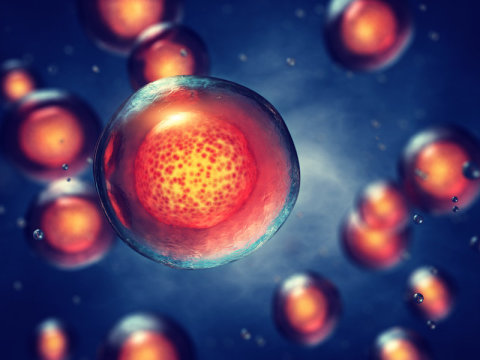 |SOURCE| Old human cells return to a more youthful and vigorous state after being induced to briefly express a panel of proteins involved in embryonic development, according to a new study by researchers at the Stanford University School of Medicine.

The researchers also found that elderly mice regained youthful strength after their existing muscle stem cells were subjected to the rejuvenating protein treatment and transplanted back into their bodies.

The study found that inducing old human cells in a lab dish to briefly express these proteins rewinds many of the molecular hallmarks of aging and renders the treated cells nearly indistinguishable from their younger counterparts.

"When iPS cells are made from adult cells, they become both youthful and pluripotent," said Vittorio Sebastiano, PhD, assistant professor of obstetrics and gynecology and the Woods Family Faculty Scholar in Pediatric Translational Medicine. "We've wondered for some time if it might be possible to simply rewind the aging clock without inducing pluripotency. Now we've found that, by tightly controlling the duration of the exposure to these protein factors, we can promote rejuvenation in multiple human cell types."

Sebastiano is the senior author of the study, which will be published online March 24 in Nature Communications. Former graduate student Tapash Sarkar, PhD, is the lead author of the article.

"We are very excited about these findings," said study co-author Thomas Rando, MD, PhD, professor of neurology and neurological sciences and the director of Stanford's Glenn Center for the Biology of Aging. "My colleagues and I have been pursuing the rejuvenation of tissues since our studies in the early 2000s revealed that systemic factors can make old tissues younger. In 2012, Howard Chang and I proposed the concept of using reprogramming factors to rejuvenate cells and tissues, and it is gratifying to see evidence of success with this approach." Chang, MD, PhD, is a professor of dermatology and of genetics at Stanford.

Researchers in Sebastiano's laboratory make iPS cells from adult cells, such as those that compose skin, by repeatedly exposing them over a period of about two weeks to a panel of proteins important to early embryonic development. They do so by introducing daily, short-lived RNA messages into the adult cells. The RNA messages encode the instructions for making the Yamanaka proteins. Over time, these proteins rewind the cells' fate -- pushing them backward along the developmental timeline until they resemble the young, embryonic-like pluripotent cells from which they originated.

During this process the cells not only shed any memories of their previous identities, but they revert to a younger state. They accomplish this transformation by wiping their DNA clean of the molecular tags that not only differentiate, say, a skin cell from a heart muscle cell, but of other tags that accumulate as a cell ages.

Recently researchers have begun to wonder whether exposing the adult cells to Yamanaka proteins for days rather than weeks could trigger this youthful reversion without inducing full-on pluripotency. In fact, researchers at the Salk Institute for Biological Studies found in 2016 that briefly expressing the four Yamanaka factors in mice with a form of premature aging extended the animals' life span by about 20%. But it wasn't clear whether this approach would work in humans.

Sarkar and Sebastiano wondered whether old human cells would respond in a similar fashion, and whether the response would be limited to just a few cell types or generalizable for many tissues. They devised a way to use genetic material called messenger RNA to temporarily express six reprogramming factors -- the four Yamanaka factors plus two additional proteins -- in human skin and blood vessel cells. Messenger RNA rapidly degrades in cells, allowing the researchers to tightly control the duration of the signal.

The researchers then compared the gene-expression patterns of treated cells and control cells, both obtained from elderly adults, with those of untreated cells from younger people. They found that cells from elderly people exhibited signs of aging reversal after just four days of exposure to the reprogramming factors. Whereas untreated elderly cells expressed higher levels of genes associated with known aging pathways, treated elderly cells more closely resembled younger cells in their patterns of gene expression.

When the researchers studied the patterns of aging-associated chemical tags called methyl groups, which serve as an indicator of a cell's chronological age, they found that the treated cells appeared to be about 1½ to 3½ years younger on average than untreated cells from elderly people, with peaks of 3½ years (in skin cells) and 7½ years (in cells that line blood vessels).

"We saw a dramatic rejuvenation across all hallmarks but one in all the cell types tested," Sebastiano said. "But our last and most important experiment was done on muscle stem cells. Although they are naturally endowed with the ability to self-renew, this capacity wanes with age. We wondered, Can we also rejuvenate stem cells and have a long-term effect?"

When the researchers transplanted old mouse muscle stem cells that had been treated back into elderly mice, the animals regained the muscle strength of younger mice, they found.

Finally, the researchers isolated cells from the cartilage of people with and without osteoarthritis. They found that the temporary exposure of the osteoarthritic cells to the reprogramming factors reduced the secretion of inflammatory molecules and improved the cells' ability to divide and function.

The researchers are now optimizing the panel of reprogramming proteins needed to rejuvenate human cells and are exploring the possibility of treating cells or tissues without removing them from the body.

"Although much more work needs to be done, we are hopeful that we may one day have the opportunity to reboot entire tissues," Sebastiano said. "But first we want to make sure that this is rigorously tested in the lab and found to be safe."

Researchers from the Veterans Affairs Palo Alto Health Care System, the University of California-Los Angeles and the Molecular Medicine Research Institute in Sunnyvale, California, also contributed to the study.

Sarkar, Quarta and Sebastiano are co-founders of the startup Turn Biotechnologies, a company that is applying the technology described in the paper to treat aging-associated conditions. Rando is a member of the scientific advisory board.