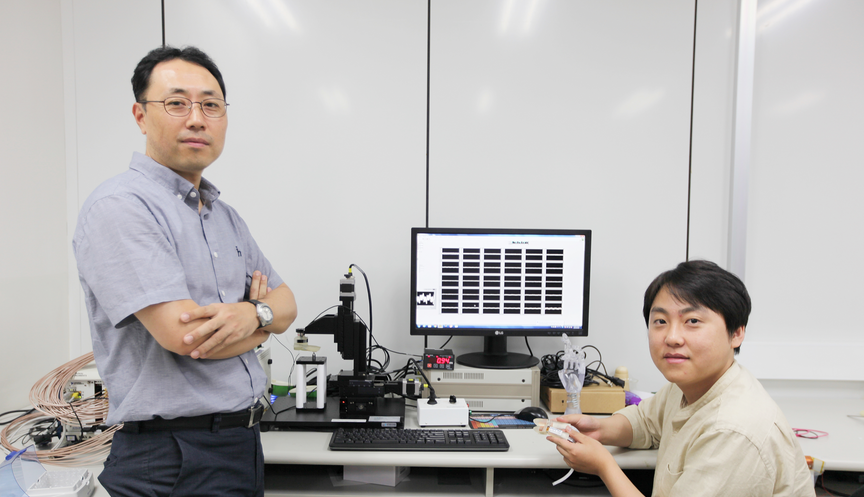 |SOURCE| DGIST announced on Wednesday, August 21 that Professor Jae Eun Jang’s team in the Department of Information and Communication Engineering developed electronic skin technology that can detect “prick” and “hot” pain sensations like humans. This research result is expected to be applied on the development of humanoid robots and patients wearing prosthetic hands in the future.

The attempt to mimic human’s five senses led to the development of innovative electronic devices such as camera and TV, which are inventions that dramatically changed human life. As a result, many scientists are continuously performing research to imitate tactile, olfactory, and palate senses and tactile sensing is expected to be the next mimetic technology for various reasons. Currently, most tactile sensor researches are focusing on physical mimetic technologies that measure the pressure used for a robot to grab an object, but psychosensory tactile research on how to mimic human tactile feeling such like soft, smooth or rough has a long way to go.

For this, the research team focused on zinc oxide nano-wire (ZnO Nano-wire) technology, which was applied as a self-power tactile sensor that does not need a battery thanks to its piezoelectric effect, which generates electrical signals by detecting pressure. Also, a temperature sensor using Seebeck effect1)  was applied at the same time for one sensor to do two jobs. The research team arranged electrodes on polyimide flexible substrate, grew the ZnO nano-wire, and could measure the piezoelectric effect by pressure and the Seebeck effect by temperature change at the same time. The research team also succeeded in developing a signal processing technique that judges the generation of pain signals considering the pressure level, stimulated area and temperature.

Professor Jang in the Department of Information and Communication Engineering said “We have developed a core base technology that can effectively detect pain, which is necessary for developing future-type tactile sensor. As an achievement of convergence research by experts in nano engineering, electronic engineering, robotics engineering, and brain sciences, it will be widely applied on electronic skin that feels various senses as well as new human-machine interactions. If robots can also feel pain, our research will expand further into technology to control robots’ aggressive tendency, which is one of the risk factors of AI development.”

This research was participated by combined M.S.-Ph.D. program student Minkyung Shim in the Department of Information and Communication Engineering as the first author and was published on the online edition of internationally-renowned journal Soft Robotics on Tuesday, July 23.